Showing posts from February, 2012
Show all

Avatar robot controlled by a suit 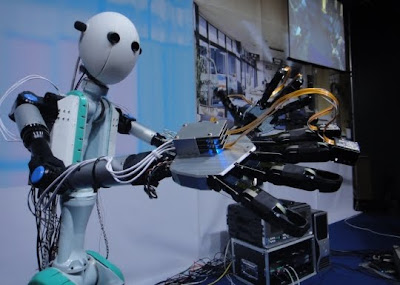 The new Japanese robot is an "avatar" electronically controlled via an interactive suit that allows the user to see through the robot's eyes and feel with his hands, which allows an accurate objects grabbing actions.

The robot, called V Telesar mimic the movements of its pilot. It was created by Japanese researchers from Keio University.

The view "through the eye" of the robot is achieved through a 3D headset, the robotic body can move in seven different directions.


Telesar's sensors are so sensitive and precise that the user can "taste" the touched object's temperature. Moreover, the user can feel the shape of small objects. The information obtained from sensors are transmitted to the user through gloves equipped with semiconductors and data engine that mimics the sensations of touch, pressure, texture and temperature of objects.


One member of the Telesar team, Furukawa Mashahiro sais about the suit that it "makes you feel as if you…
Read more
More posts